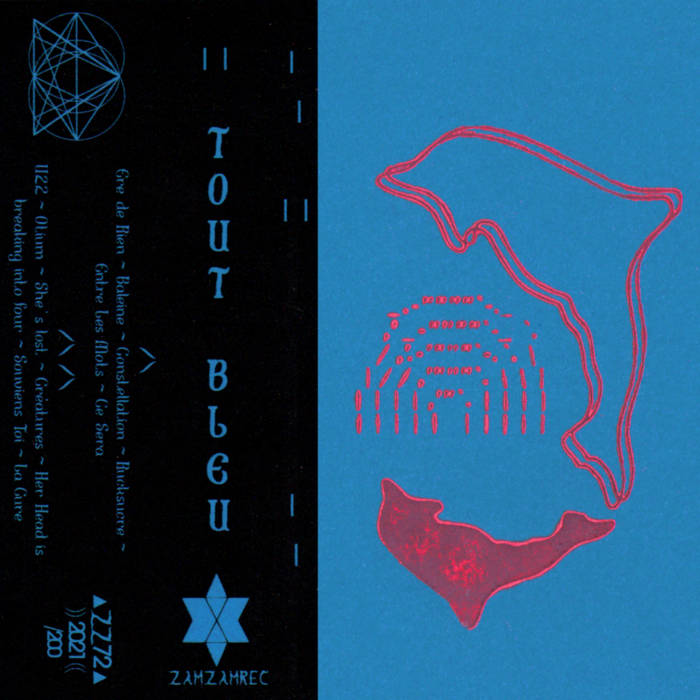 This release of Tout Bleu is the compilation of their new album Otium (LP coming out on Bongo Joe, December 2021), and the previous one Creatures (10" published by Urgence Disk Records, Geneva, July 2021).

Otium, recalls a route where the electronic crosses paths with the acoustic. This new milestone in Genevan multi-instrumentalist Simone Aubert's (Massicot, Hyperculte) musical field represents a kind of fruitful deceleration. Initially conceived as a solo project in 2018, the act is now an exploration ground for the musicians gathered on Otium : Naomi Mabanda on the cello (Orchestre Tout Puissant Marcel Duchamp, Chien Mon Ami) and Luciano Turella on the alto (Irtum Branda) encounter the sampling machines of POL, that could already be found on the first eponymous album Tout Bleu.

In Tout Bleu's music, the part-melodic, part-abrasive riffs reminiscent of Massicot are present, and so are the socially engaged, energetic singing of Hyperculte. However, the band, by using acoustic instruments, vocals and electric guitar in an unconventional way, draws an orchestral landscape that sometimes flirts with pop, and where strings merge in polyrythm on low tempo beats.

In Latin, otium suggests free time, detached from any contingency, a form of pure leisure, in the non-economic sense of the term, which is opposed to neg-otium, commerce. All Bleu claims this time of withdrawal, this productive, fertile and assumed idleness, which allows the group to unfold without hindrance its hypnotic and pulsating web, between krautrock trance and atmospheric no-wave.

A sort of pre-rock spleen, Otium distils in nine tracks a dark, tense but soft music, nourished by hope. The arrangements exhale the warm or sharp essences of the strings, which carry the sometimes fragile and sometimes fearless voice of Simone Aubert. The lyrics are as much invocations to the rallying of the collective conscience as exutory cries pushed far into the forest.

On Otium, Tout Bleu elaborates its pieces like Circe the magician distils and mixes drugs and poisons. A piercing reflection of our decayed time, Otium appears as a pain and its remedy at the same time.

All songs composed by Simone Aubert with the beautiful help of the band.
Produced, arranged and mixed by POL at Black Bunker Studio, Geneva 2021.
Mastering by Lad Agabekov, Caduceus Studio, june 2021

Mixed and produced by POL at Black Bunker Studio in Geneva 2021
Mastering/pressage at The Vinyle Officine in 2021.

All songs composed by Simone Aubert except “Her head is breaking into four” which is a cover from Carlos Peron.